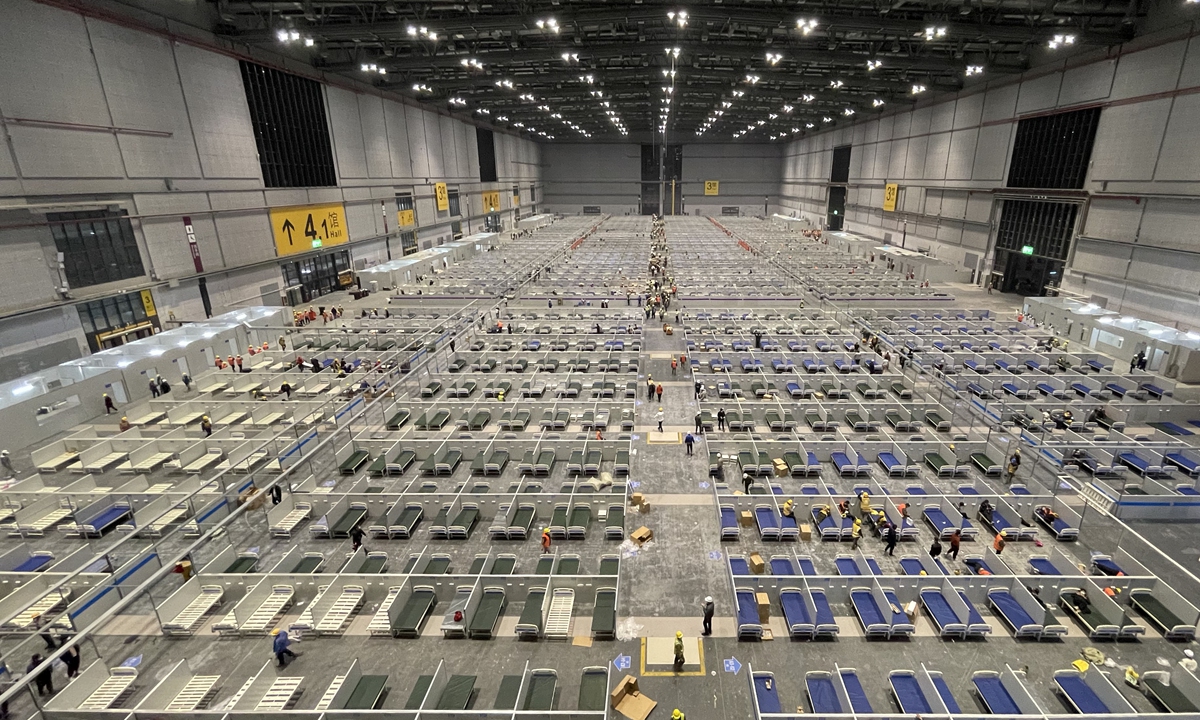 Shanghai’s largest makeshift hospital, renovated from the National Convention & Exhibition Center (Shanghai), is delivered on April 9, 2022 and could provide up to 50,000 beds. Photo: Xinhua

A new study has given the first comprehensive description of non-severe COVID-19 patients without unstable medical conditions, which accounted for more than 95% of all cases during the Shanghai outbreak, and it shows that comprehensive and accurate focus of resources services on the vulnerable population can minimize the risk of overwhelming the regional medical system.

Since the identification of the Omicron variant in November 2021, the strain has become the leading cause of infections worldwide, with cases increasing exponentially in several countries. The high transmissibility of the Omicron variant has placed an enormous burden on healthcare resources, although the vast majority of cases are not serious.

The study was published Saturday in the China CDC Weekly.

Affected by the global spread of Omicron, Shanghai had reported 58,104 confirmed patients and 591,506 asymptomatic infections as of Sunday. Under the policy that “all people in need have been tested and, if positive, have been quarantined, hospitalized or treated” in China, all silent carriers, mild cases and medium cases received centralized treatment.

Analysis of the overall clinical profile, severe rates and prognosis of the large number of non-serious Omicron infections during the Shanghai outbreak are of critical importance for public health policies, including prevention strategies. hospitalization and treatment during the pandemic.

According to the study, cough and sputum production were the most common symptoms in non-severe patients, followed by fatigue and fever. The median persistence of symptoms was seven days. The mean viral shedding time (VST) was six days.

In the entire cohort, 22 patients developed serious/critical infections. All were in the at-risk group of patients over the age of 60, who had stable underlying medical conditions (including cardiovascular disease, diabetes mellitus, lung disease, liver disease, cerebrovascular disease or kidneys) or an immunodeficiency condition such as human immunodeficiency virus infection.

Severity rates among all subjects and subjects in the at-risk group were 0.065% and 0.238%, respectively. The severity rate of the risk-free group was nil.

The study’s author said it had at least three limitations. First, the study recruited only non-severe and stabilized Omicron patients and therefore could not describe the overall clinical spectrum of Omicron infections, especially severe Omicron infections. Therefore, the study reflected the clinical manifestations and outcomes of relatively healthy Omicron-infected patients. Second, not all patients received CT scans or lab tests. Third, all symptoms were self-reported, which could introduce bias.

The study shows that advanced age, lack of vaccination and the presence of multiple underlying conditions increase the risk of progression to severe/critical disease, meaning that even among people with non-serious infections , there are still people vulnerable to the Omicron variant.

Thus, precise prevention and control must be carried out for vulnerable groups to reduce the mortality rate of these groups and reduce the damage caused by Omicron to a lower level.

He suggested that it is likely to significantly and gradually reduce the rate of serious illness and death among vulnerable populations if protective measures are taken, including full vaccination coverage, adequate special protection for vulnerable groups during the epidemic period and their immediate access to medical treatment. as soon as possible after infection.

If medical resources are fully and accurately focused on the vulnerable population and appropriate basic medical support is provided to the non-vulnerable group, medical resources will be optimized and the diagnosis and treatment of non-COVID-19 diseases will not be omitted. due to COVID -19 outbreaks, the study notes.