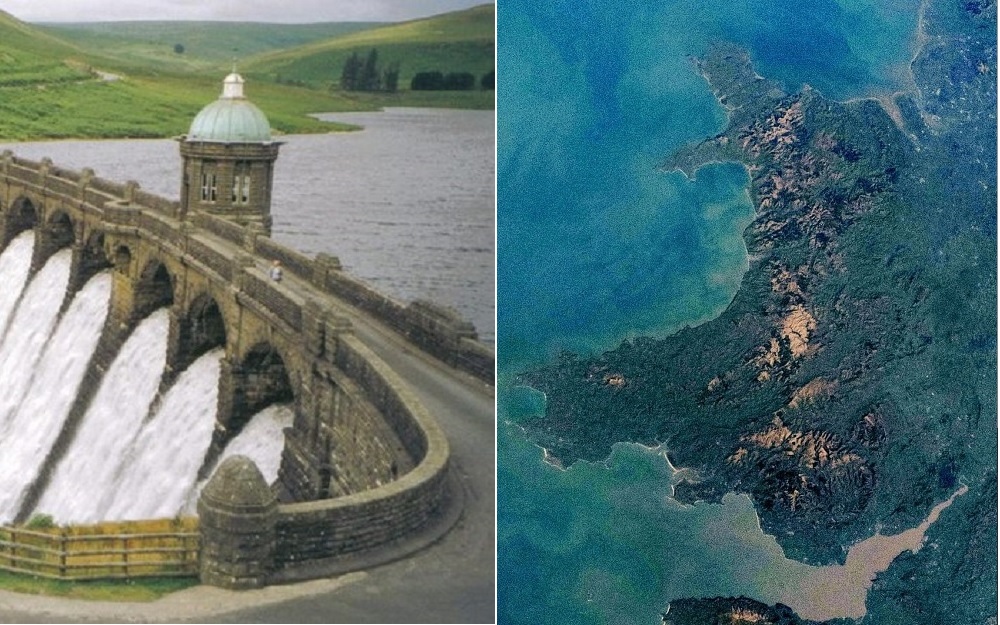 Should Wales control its own water? Over 5,000 sign petition demanding powers in two days

More than 5,000 people have signed a petition in just two days calling for Wales to have the power to control its own water resources.

Activists also say they will hold protests in Tryweryn and Lake Vyrnwy on Monday.

Currently, the Welsh Parliament and Government have no control over cross-border water regulation on the Welsh-England border.

Campaigners argue that if Wales had this power it could demand compensation for the use of Welsh water to provide drinking water in England.

But those numbers could rise due to plans between United Utilities and Thames Water to supply water from Wales to drought-hit England.

The petition launched Thursday by one of YesCymru’s directors, Nerys Jenkins, claims that the current export of water from Wales to England, from the Elan Valley to Birmingham and from Lake Vyrnwy and Tryweryn to Liverpool, could be worth up to to £4.5 billion a year.

In 2015 John Elfed Jones, former chairman of Welsh Water, estimated the figure to be in the low hundreds of millions.

Urging people to sign the petition, petitioner Nerys Jenkins said: ‘Work has already started to transfer water from Wales to drought-stricken areas of England, according to the chairman. of the National Infrastructure Commission.

“Water is a precious commodity and this is another example of London diverting our most precious resource without any consultation or benefit to our communities.

The petition also notes that Wales should control its own energy supply and seabed, which is currently mostly owned by the Crown Estate.

The petition was launched after the chairman of the National Infrastructure Commission said “work has already begun” to transfer water from Wales to drought-stricken areas of England.

Sir John Armitt, speaking on The briefing room on Radio 4 said water companies in England did not want to invest in reservoirs and were unpopular with communities who did not want their lands flooded.

Instead, he said, Severn Trent and Thames Water were in talks to transfer water from Wales to southern England, starting at Lake Vyrnwy and being transferred through pipes or a channel to the Thames basin.

John Armitt said the companies were looking to get “more water on the supply side by building more reservoir capacity, or additionally, providing a water transfer system so that you carry water from where you have a surplus in the country to areas where you are likely to have a shortage”.

Reservoirs were, he said, “the most capital-intensive thing you can invest in. So we have the natural reluctance, I guess, of private companies to shell out the capital to build new reservoirs, and no big pressure on them, be frank on the part of the regulator to build new reservoir capacity.

“And of course everyone knows that as soon as you come up with a big new reservoir, you’re going to run into local resistance from local people who won’t want to see two or three square miles or potentially four square miles of agricultural land land devoted to a new reservoir.

David Aaronovitch chimed in to say, “Or as in the case of Wales at the time, whole villages.”

Sir John Armitt added: “Well, indeed, and of course one of the largest in Wales is Lake Vyrnwy, which would be the potential source of a water transfer system.

“So Severn Trent controls Lake Verwey in mid Wales. And the Thames [Water] control the Thames basin, and the plan they have is to move the water.

“And that could be up to three to 500 million liters a day between those two catchment areas when you do it through a series of pipes or you can do it through the canal system.”

On Wednesday, a university professor said water could be seen as the “oil of Wales” in the future if plans to transport water to drought-stricken parts of England go through.

Professor Roger Falconer of Cardiff University said Newyddion S4C that England should “pay for the water”, with revenue being reinvested in local communities in Wales.

He added that with England’s water supply under ‘severe pressure’, Wales could consider increasing the size of its reservoir in the Elan Valley and transferring the extra water captured there. by the rivers Wye or Severn and by canals to the upper Thames.

Speaking to S4C News, he said it was “a good opportunity in many ways”.

“We would supply direct in drought conditions to the south east of England and I would see that as Wales’ oil for the future in terms of revenue,” he said.

Thames Water has confirmed it is “consulting” on plans to transfer water from reservoirs owned by United Utilities in Wales. United Utilities said the plans would not affect the amount of water available to existing customers.

According to Daily mail earlier this weeksenior Tories are pushing the idea again after parts of England were officially declared drought.

“Senior Tories said yesterday that the current droughts meant it was time to revise the plan,” said Brendan Carlin, the newspaper’s political reporter.

They quoted a spokesman for the environment department Defra who said that “inter-regional water transfers can play an important role in moving water from parts of the country where supplies are plentiful to those where demand is high.”

Water would be shipped from the south of Scotland as well as north Wales, as these areas receive much more rainfall than parts of England, “to create a giant ‘natural water network’ across the United Kingdom”.

Such a plan, however, would likely be particularly controversial in Wales where earlier plans to supply England with water, in particular the drowning of Capel Celyn and Llawddyn, sparked political opposition.

The independence movement YesCymru has campaigned on the issue, calling on Wales to receive compensation for the 243 billion liters of water extracted per year.

London’s GMB plan would see water pumped from Wales to the Cotswold canals and along the Sapperton Canal Tunnel in Gloucester.

Mark Holland, GMB London’s regional organizer for the water industry, said: ‘Thames Water should accept water donated by United Utilities from Lake Vyrnwy and channel it to the River Thames via the restoration of the Cotswold Canals and the Sapperton Tunnel.

“This plan was covered in Thames Water’s 2019 draft plan for London’s water supply in the 21st century, but is not included in the current list of things Thames Water plans to do.

“Instead of this very achievable plan, one of the things Thames Water plans to build on is the hope that consumers will reduce their daily consumption from 145 liters to 125 litres.”

Plaid Cymru responded to canal plans earlier this week saying Wales should be paid more than a ‘pitt’ for its water.

‘You pay a pittance for what’s already taken, just 3p a tonne or 1,000 litres,’ he said. “Yet water industry bosses are being paid a fortune with reports that Thames Water bosses have received £2.4million bonuses in 2020 and 2021, despite the company having lost up to a quarter of all its water due to leaks.

“Similarly, build the long-awaited new Abingdon Reservoir, a proposal that has been circulating since 2006, and restart the desalination plant to help matters.

“The Gateway Water Treatment Works in Beckton, east London, takes water from the Thames Estuary, treats it and makes it drinkable. It was completed in 2010 for use in dry weather events.

“It has the capacity to supply up to 100 million liters of water a day – it was used during dry spells to supply Thames Water reservoirs in London – but was shut down during the current heat wave!

“It further underlines the need for water to be seen as a precious resource, a commodity and Wales are fortunate to have it, however, we cannot allow it to be taken and used by big business and wasted while our communities receive a pittance from it.

‘Imagine the benefits to Powys if we only got 1p a liter – the financial problems of our local utilities would be solved.’