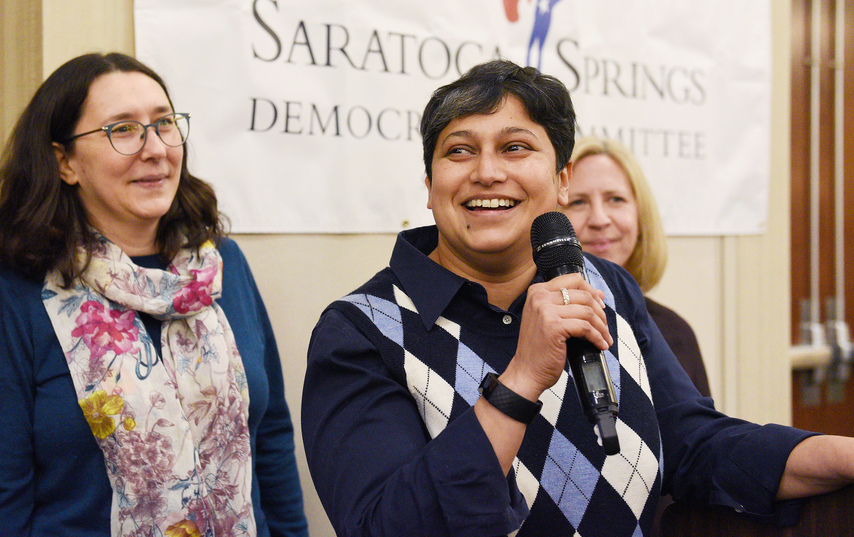 Saratoga Springs to allow some public oversight of the budget process; participatory budgeting will involve less than 1% of the city budget

SARATOGA SPRINGS – If you’re not at the table, you’re on the menu.

Saratoga Springs Finance Commissioner Minita Sanghvi believes in that sentiment, which is exactly why she said she implemented participatory budgeting to help broaden the picture.

Participatory budgeting is a process that allows citizens to decide how to spend part of a municipality’s budget. Conceptually, it is a bold practice that puts public funding directly into the hands of the public. But in reality, the Saratoga Springs initiative, which the city council approved Tuesday night, is much more measured than it first appears. Additionally, a budget analyst from Greensboro, North Carolina, which is in its fourth round of participatory budgeting and is one of the cities Sanghvi cited as examples, said the process tends to present many challenges.

Nonetheless, the initiative in Saratoga is part of Sanghvi’s plan to deliver on campaign promises of inclusion.

“Right off the bat, I talked about making Saratoga Springs more inclusive and having more people around the table,” Sanghvi said. “I had promised everyone that if I get elected, I will expand the picture and reinvent it. This is our way.”

Sanghvi also said she spoke to Greensboro officials and learned about the city’s challenges. Additionally, the mayor of a New Jersey town who has been using this practice for six years said that participatory budgeting works very well where he lives.

Crucially, only a very small fraction of Saratoga Springs’ finances will be spent on participatory budgeting — in fact, the total is 0.25% of the city’s budget, or, according to Sanghvi, should be around $100,000.

“It won’t have a disproportionate impact on our budget, but it’s also big enough for us to put in place projects that citizens bring forward.”

Launched in Brazil in 1989, Participatory Budgeting has been used in more than 7,000 cities around the world and has funded more than 1,630 projects, according to the Participatory Budgeting Project. Cities using it include Chicago and New York, said Elizabeth Crews, director of Democracy Beyond Elections. Saratoga’s initiative is the first for a city in the region, although Rochester currently employs the practice, Crews said.

“The most urgent thing for me is to look at the state of our democracy. People are cynical. They don’t trust the government or they don’t believe the government is working for them,” Crews said. “It’s a way to reverse this dynamic. It might be an antidote to that cynicism we see about how democracy works in our current climate.

In Saratoga Springs, the way participatory budgeting will work is that citizens — either as individuals or through an organization — can nominate projects to pay out of the approximately $100,000, which the city council agreed to on Tuesday. to reserve for the participatory process. . Projects can be anything from public showers to trails to murals to events, as long as they serve the public good and are in public spaces. Project ideas can be submitted via an online form, in person or by mail. Sanghvi will also host a series of public forums, where she will explain the process and actively solicit ideas, beginning with an event at the Saratoga Senior Center on April 11 at 2 p.m.

“We are excited about the potential of this opportunity to have our say. We are always in favor of greater transparency and greater public engagement,” Mahaney said. “I like the idea of ​​testing this and seeing how it works and building on the successes of a trial.”

In addition to seeking project ideas, Sanghvi is also looking for candidates to fill an 11-person education, awareness and decision-making committee that will play a vital role in the process. This committee, which will be selected by Sanghvi, Deputy Finance Commissioner Heather Crocker and Budget Director Mr. Lynn Bachner, will be responsible for working with project applicants to develop project ideas, Sanghvi said.

Suppose someone proposes a bus shelter. The committee can help explain the planning process, labor and material requirements, and future maintenance to expect.

“You have to think about a lot of things,” Sanghvi said. “It will give people an idea of ​​how long things take and the process in government.”

After the committee has worked with the applicants to develop viability and a realistic timeline for the projects, the specific projects are put out to the public for a vote scheduled for July. For voting, projects will be separated into two categories: individuals and organizations. The public vote will then be taken into account by Sanghvi when she makes her final budget recommendations in November to be voted on by the city council by the end of the year.

“We tend to define PB as the decision of the community,” Crews said.

Kixmiller said Greensboro, a city of about 300,000 with a crowdfunding budget of about $500,000 — less than 1% of the total budget — said the city often struggles to find projects that would work.

“It’s a challenge to come up with ideas that will be feasible and achievable in the community,” she said.

Finding and keeping volunteers can also be difficult, she said.

“It’s a challenge to recruit volunteers and retain them throughout the [vetting] process,” Kixmiller said.

She said the city has even tried to shorten the length of the verification process to make it easier for volunteers, but then that can make it harder for staff to have enough time to weigh in.

But in Freehold Borough, New Jersey, the mayor Kevin Kane said participatory budgeting has been transparent and well supported. Projects include lighting the local little league field, allowing the facility to host tournaments of all starts, the mayor said.

“There are a lot of good ideas. The thing is, we’re elected to run the city, but we don’t have all the answers to everything, so we’re really looking to get ideas from people,” Kane said. The Borough’s participatory budget allocation is $200,000. “It teaches them the whole process, and it’s something they can be proud of. This also creates feature leaders.

At Saratoga Springs, the goal is to bring new people’s ideas into the fold. Sanghvi said the proactive process, with city leaders and the committee to be formed, actively seeking ideas for projects and helping to develop those ideas – rather than just responding to issues raised by the public at city meetings. – can facilitate this objective.

“In a city of 29,000 people, 20 people is a very small segment. So we were like, ‘What can we do to bring that to people?’ Said Sanghvi. “People don’t always feel like they have the ability to come to City Hall. It becomes a very small select population that knows how the budget works, knows enough about government and knows people enough to come and [participate]. Instead of expecting people to come to City Hall, it’s proactive.

For example, Sanghvi noted that a homeless person may have an idea for a public shower but may not feel comfortable attending a council meeting and giving a presentation on the issue. Participatory budgeting eliminates this step.

But Kixmiller said Greensboro hasn’t seen a huge uptick in attendance as a result of his program.

“Politically, it’s a win for elected officials, and it’s a win for those who are generally engaged in their community to feel more connected and even better informed about the various city processes,” Kixmiller said. “We certainly attract new people, but it’s not a huge number. It can have a lot of impact for a small number of people, but it has less impact in general on the community as a whole.

Still, Kixmiller said she didn’t want to be a complete naysayer. She said participatory budgeting has led to several meaningful projects, such as raising a bridge railing that was deemed unsafe and installing solar lighting.

“Anything a city does to help engage people is important and worthwhile, and anything that helps build goodwill and exchange information is positive. PB is definitely a driver of that,” Kixmiller said.

Sanghvi said she can’t wait to get the ball rolling in Saratoga Springs.

“One of the things we’re most excited about is seeing what’s going on in the minds of our people,” she said. “I’m totally excited, and I’m also looking forward to seeing what happens.”

More from The Daily Gazette: