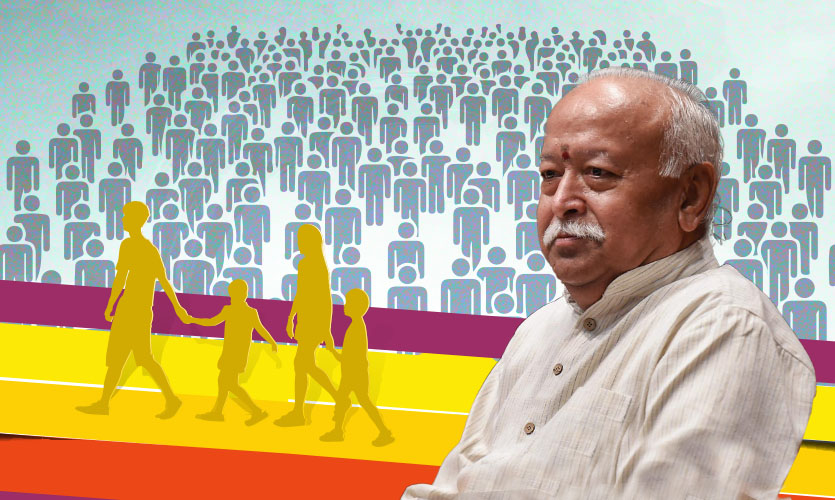 The Rashtriya Swayamsevak Sangh once again reiterated its suggestion for a population control policyto meet India’s demographic challenges over the next 50 years.

“The Sangh has already passed a proposal keeping an eye on the future of the nation for the next 50 years,” said RSS Joint Secretary General Dr Manmohan Vaidya, who is in the capital Raipur. of Chhatisgarh, with other senior RSS leaders, discussing various social issues, including religious conversions and expanding the reach of the Hindutva organization and its affiliates.

RSS, the ideological parent of the Bharatiya Janata Party (BJP), has long called for a policy of population control. Earlier, RSS leader Mohan Bhagwat expressed concern over the “demographic imbalance” in the country and demanded that a clear policy be drawn up to control the country’s demographics.

The Population Control Bill of 2019

With the suggestion of a two-child policy, the Population Control Bill has been introduced in Parliament 35 times since independence. The latest bill was introduced in parliament by BJP Rajya Sabha MP Rakesh Sinha. The move came after the United Nations predicted India would overtake China as the world’s most populous country by 2030.

In the Population Control Bill of 2019, a couple cannot have more than two children. The bill states that families with more than two children will not be eligible for government jobs and other state incentives such as educational benefits, free health care, better employment opportunities, home loans and tax breaks.

The bill, however, was withdrawn in April this year, after Union Health Minister Mansukh Mandaviya flatly rejected it, saying the government had successfully used and implemented the health awareness among the people to control the people of the country.

Last year in July, Uttar Pradesh became the first state in the country to release the draft population policy 2021-2030. UP Chief Minister Yogi Adityanath said that with this bill, the government’s main objective is to stabilize the “demographic imbalance”, while improving social welfare and development in the country. ‘State.

The project, which promotes the two-child practice, said couples who have more than two children will be barred from contesting local agency polls, government jobs and any type of state government grant.

The bill also states that couples with one child will enjoy free health facilities for their child up to the age of 20, free education until graduation, and preference for admission to all educational institutions, including IIMs and AIIMS. Parents of an unmarried child, who fall under the poverty line (BPL), will also receive Rs 80,000-1,00,000.

Earlier, Assam CM Himanta Biswa Sarma said that his government is also considering the implementation of population control policy based on the two child policy in his state. He said government benefits, including loan forgiveness, will be granted in the near future to those who follow the state’s population control standards. Sarma also urged the state’s immigrant Muslim community to “embrace” decent family planning because the state has land and resources.

The report also claims that the RSS, during its recent meeting in Dehradun, suggested that the government of Uttarakhand must have its own population control policy, similar to Assam and Uttar Pradesh, to combat against the “demographic imbalance” in the state.

The Population Control Bill is facing constitutional challenges because it violates the constitutional rights of citizens under Section 16 (equal opportunity in public employment) and Section 21 (protection of life and liberty).

Citing violation of constitutional rights, the Supreme Court in 2018 denied a petition asking the highest court to implement a strict population control law across the country.

Article 22 of the 1969 Declaration on Social Progress and Development, adopted by the United Nations General Assembly in a resolution, also guarantees that couples have the right to choose freely and responsibly the number of children. that they will have.

Critics and policy makers believe that women will be the greatest victims, regardless of their religion, if such laws come into effect, and that they will be excluded from political participation.

It will also create problems in subsequent marriages, as a divorced person who has two children with a former partner will not be able to have children with their next spouse.

Read more: Over 70% of Ministers in Bihar have criminal backgrounds, 80% of Crorepatis