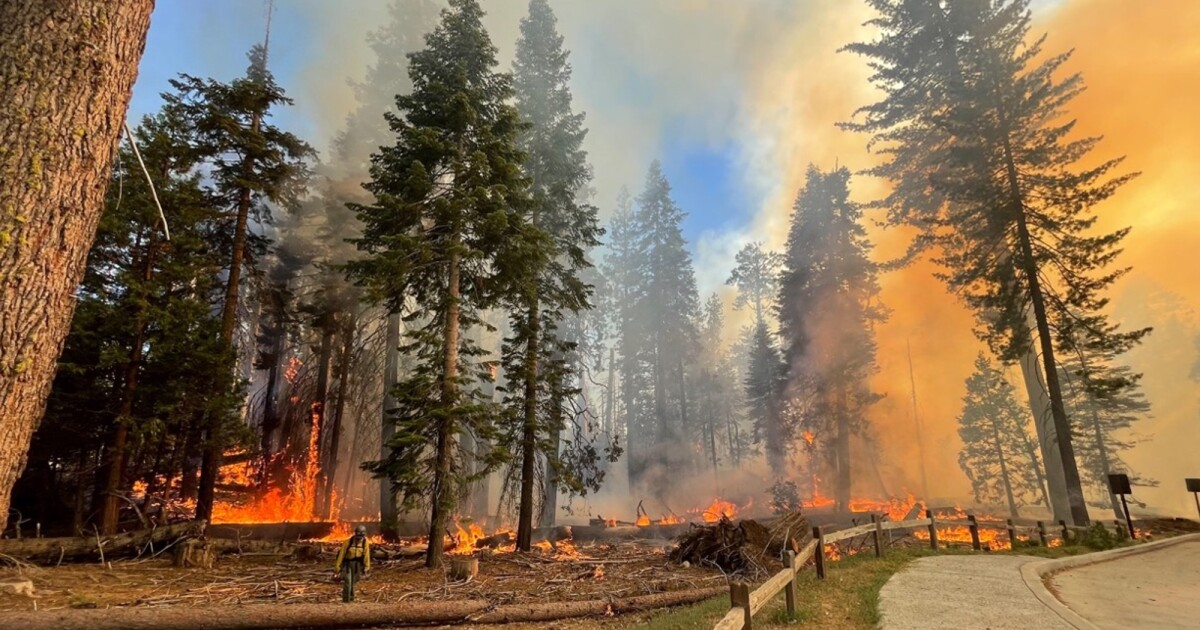 The first Michael Gilbert, a 67-year-old climber and hunter, heard of the fire in Yosemite National Park was from a mother and daughter who arrived gasping for air on Friday.

They had been near the famous Mariposa Grove of the Giant Sequoia Park. They saw a fire “this big,” said the mother, extending her arms, pointing a few feet. They ran for a few seconds and turned around. Two trees were on fire. Twenty seconds later, she said, more trees than she could count.

As she told the story, fire planes were already flying overhead, Gilbert recalled Saturday from his post at Tenaya Lodge.

By Saturday morning, the Washburn Fire had grown to around 1,190 acres and threatened some 500 giant sequoias, as well as the community of Wawona.

The fire was the latest to threaten the ancient giants, which are only found in the wild on the western slopes of the Sierra Nevada. Although adapted to thrive in fire, redwoods are increasingly no match for high-intensity wildfires brought on by climate change, drought and decades of aggressive fire suppression that have resulted in a accumulation of dense vegetation in some wooded areas.

“Because of this combination, we have these fires that are large and intense and last longer than anyone has seen in any part of their experience,” said Nancy Phillipe, spokeswoman for Yosemite Fire Information.

Crews were spraying trees in Mariposa Grove and scraping the ground down to bare mineral soil in an attempt to slow the fire’s spread, she said. They also wrapped some of the redwoods in protective foil, giving priority to older named trees like the Grizzly Giant.

“This 2,000 to 3,000 year old tree has a rich and extensive history dating back to Abraham Lincoln,” Phillipe said. The president signed legislation protecting Yosemite Grove and Valley in 1864, a precedent that paved the way for the creation of national parks and which some say marked the beginning of the modern conservation movement.

“There’s this amazing feeling that you get when you’re with these giant trees – it kind of consumes you,” Phillipe said. “It’s such a powerful connection to history, nature and the park.”

On Saturday, Gilbert named himself chief comforter for the many tourists who traveled from around the world to see the wonders of Yosemite and were stranded by the fire.

He led a family of five from Australia south to Sequoia National Park.

“You still have a chance to see the giants,” he told them.

DeAnne Smith, who was from Texas, showed her a photo she took while leaving the park on Friday night.

“The fire was literally right in front of us,” she said.

His family was among the last outings before the road was closed south of Wawona. About 1,600 residents and visitors were evacuated, according to Phillipe.

“I’m just sad for the redwood,” Smith said. “I desperately want them to save the redwoods.”

The fire started around 2 p.m. Thursday in the Washburn Trail grove, Phillipe said. The cause is still under investigation, but she noted the weather was clear and there was no obvious indication the fire started naturally.

No confinement had been reported on Saturday afternoon. Officials were concerned that lower humidity and higher temperatures forecast for the weekend could help the fire spread.

“We’re hitting really hard with the air resources and the ground resources that we have,” Phillipe said. “The next 48 hours will be critical for us.”

About 95% of Yosemite National Park is wilderness, and fire plays a natural role in its ecosystem, so officials often manage fires for resources rather than putting them out immediately. This fire is different because of the threat it poses to Wawona and Mariposa Grove, so crews are taking a total suppression approach that includes using bulldozers to create a barrier around the community, Phillipe said.

“Normally we don’t have bulldozers coming to dig the line,” she said. “We don’t normally have a self-timer that gets dropped in the park. But that’s how important these resources are, and that’s why we use everything we can, from sunrise to sunset.

Authorities hoped that a history of prescribed burns at Mariposa Grove would help mitigate the damage. The forest is adapted to frequent, low-intensity fires started by lightning and set intentionally by Aboriginal people. The Park Service has sought to mimic this regime by regularly setting fires that burn along the forest floor to remove brush and so-called scale fuels that might otherwise help carry the flames into the canopy and kill the trees.

Research has shown that landscapes that have been regularly treated with prescribed burns can help slow wildfires, giving firefighters a better chance of getting the upper hand.

“What we’ve found is that when we get unwanted fires, when they come into the prescribed burn areas, it slows down that rate of spread and really helps us work towards containment,” Phillipe said.

At the same time, she said, parts of the grove still have dense concentrations of dead plant material due to the death of bark beetles that plagued the Sierra Nevada. These infestations can become more destructive during droughts as the trees are unable to produce enough sap to fight them off. And last year, a Mono wind event that ripped through the grove downed at least 15 redwoods, which remain on the forest floor and could help fuel the fire.

The 78 groves of giant sequoias scattered across the Sierra are just 25,000 acres, said Joanna Nelson, director of science and conservation planning at the nonprofit conservation group Save the Redwoods League. The species has lived beside fire for millions of years, with thick bark and branches adapted to reach above the flames. Trees depend on low to moderate intensity fire to reproduce, as the blasts of heat cause their cones to open and the flames to strip dirt from the forest floor so that seeds can better germinate in the ground below. , Nelson said.

But wildfires have decimated redwood populations in recent years due to a federal fire exclusion policy and ban on cultural burning combined with an era of warming and drying that together have facilitated starting and burning fires while providing an abundance of fuel to fan them, she says.

“The fires we have now are incredibly intense and destructive and they are killing large, mature trees for the first time,” she said. “In any recorded history we have through the tree rings, we don’t see that kind of mortality so far.”

“If you lose about 19% of giant sequoias in 14 months — and you’ve certainly lost 20% in six years — that’s just unsustainable numbers,” Nelson said. “We can’t go on like this.”

If the trend continues, she says, it’s possible the trees are only in a greenhouse or seed bank rather than in the Sierra Nevada.

What is needed to save them is a combination of reduced greenhouse gas emissions to slow warming and increased on-the-ground stewardship, such as thinning and prescribed burning to reduce fuel, she said.

“Having these big, incredibly tall trees in the mountains where people can walk under them is important to me,” she said.

Meanwhile, those in Yosemite were preparing for another summer of destructive fires. Visitors to Tenaya Lodge splashed in the hotel pool and looked unnaturally tanned by the orange shimmer of smoke. All around were dead and dying trees.

“The railroad fire, the junction fire,” said Rebecca Casey, who runs recreational activities, counting the reasons on her fingers. ” Drought. The bark beetles.

“It always seems like everything will be fine until they say it’s time to go,” she said.

Wigglesworth reported from Los Angeles and Marcum from Fish Camp.