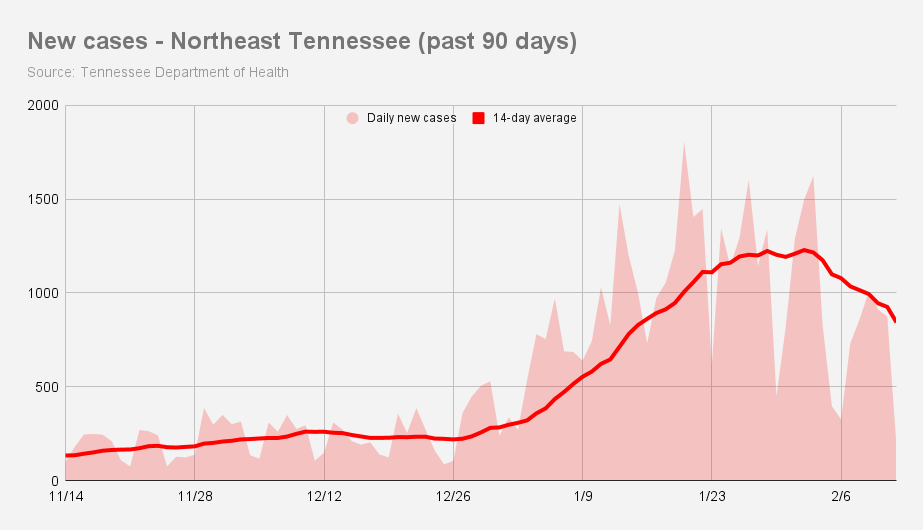 NASHVILLE, Tenn. (WJHL) — The rate of COVID-19 cases in northeast Tennessee continued to decline last week, according to data released Wednesday by the Tennessee Department of Health.

The Seven Counties region added 4,894 new cases last week, 29% lower than the 6,902 cases reported the previous week and 42% lower than the 8,480 new cases two weeks prior when the omicron surge peaked locally.

Northeast Tennessee’s seven-day case rate as of Saturday was about half of what it was two and a half weeks ago on Jan. 26, when the region’s case rate hit its highest. high level since the beginning of the pandemic.

Washington was the only county that had a higher community spread rate Saturday compared to a week prior.

The week-over-week change is the community spread rate by county:

All seven counties reported fewer active cases on Saturday than a week earlier.

One week change in active cases:

Northeast Tennessee had 7,910 active cases Saturday, about half of the record 14,907 active cases reported on Jan. 29. Saturday’s number of active cases was the lowest since January 11.

Last week, the number of deaths from COVID-19 in the region increased by 32 deaths, compared to 36 the previous week. However, both numbers are likely underreported due to delays in deaths reported to the state.

As of Wednesday, 254,710 people, or about 50.4% of the total population, in northeast Tennessee were fully vaccinated.

There were 624 new vaccinations in the past week, up 4% from the previous seven-day period, but down 51% from about a month ago.