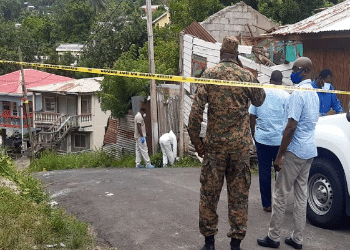 The country recorded 25 murders in the first five months of this year and a record 74 homicides in 2021. Deputy Police Commissioner George Nicholas recently spoke about the rise in murders, saying “we have too many homicides recorded for our small population”. according to the Caribbean media Loop News.

In the last days of May, two young men were killed several days in a row in the town of Vieux Fort, according to the former Prime Minister and current deputy for Vieux-Fort Sud, Kenny D. Anthony, who called for a meeting urgent with police.

Residents of Vieux Fort, a town on the southern tip of the island, have collected 20,000 Saint Lucia dollars ($7,400) as a reward for information about the shooting death of 21-year-old Jesus Blanchard. Video of Blanchard’s murder showed him sitting by the side of the road with another man on the night of May 28, when a gunman approached them and shot Blanchard multiple times.

Other murders in May frightened citizens. On May 23, Catharine Charles, 56, was found dead at her home in Laborie, a village on the south coast of the country. About a week earlier, the body of Mary Gimie, 54, was discovered outside her home in the western town of Soufriere.

The record 74 murders recorded last year in Saint Lucia meant the country had a homicide rate of 40 per 100,000 people. This places it among other Caribbean countries, Trinidad and Tobago and Jamaica, among the top five countries with the highest homicide rates in Latin America and the Caribbean in 2021.

Gang violence has been blamed for much of the recent bloodshed in Saint Lucia, which has a history of street gangs. In November 2021, Anthony wrote in a post on Facebook that the city of Vieux Fort had “virtually become a war zone”.

Saint Lucia serves as a transit hub for South American cocaine smuggled to the United States and Europe. Traffickers use local gangs to receive and protect drug shipments. Competition for this slice of the drug trade and street drug sales often fuel violence.

American firearms are also smuggled into the country. For example, a Pennsylvania man was sentenced in March 2022 to about four years in prison for trafficking nearly 40 guns to a buyer in Saint Lucia. The firearms – concealed in packages of detergent, kitty litter and other household items – included semi-automatic pistols, rifles and high-capacity ammunition, according to a press release from the US Department of Justice. .

In March, Prime Minister Philip J. Pierre announced that he planned to seek “draconian penalties” for the illegal possession of weapons and ammunition. The majority of murders in Saint Lucia are committed with firearms.

Murders often go unsolved. Only one in five murders were cleared in 2020, according to the Saint Lucia Central Bureau of Statistics. The Royal Saint Lucia Police Force (RSLPF) has been criticized for its low rate of solving murders, and there have been public complaints about the absence or reduction of officers on duty.

Saint Lucia is not alone in the region struggling with rising violence. In the Caribbean, Jamaica, Trinidad and Tobago and Barbados have seen increased gun violence and homicides in recent years.

We want to maintain the largest database on organized crime in Latin America, but to do this we need resources.

What are your thoughts? Click here to send your comments to InSight Crime.

We encourage readers to copy and distribute our work for non-commercial purposes, with attribution to InSight Crime in the byline and links to the original at the top and bottom of the article. See the Creative Commons website for more details on how to share our work, and please email us if you use an article.