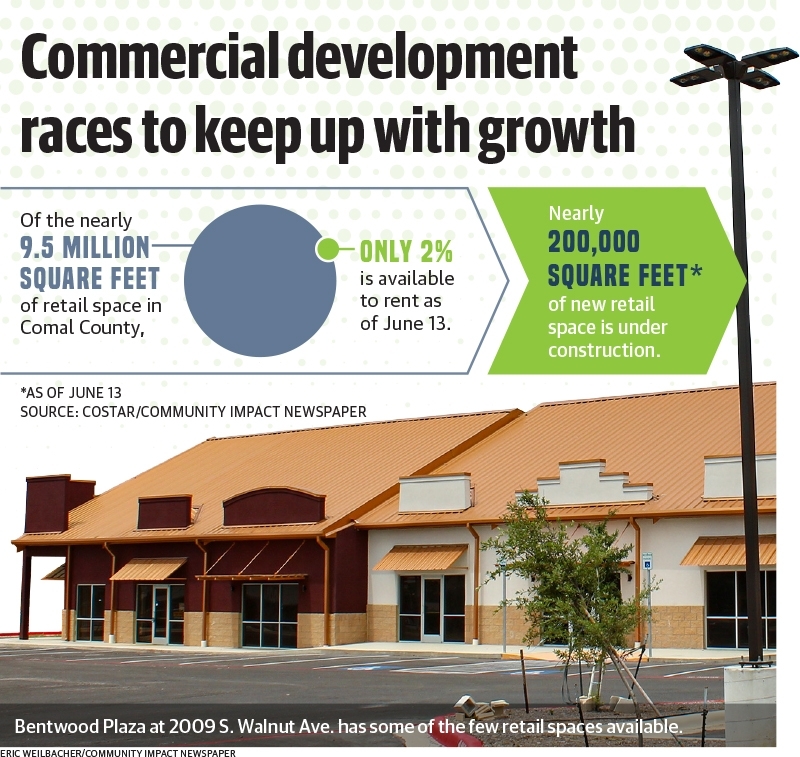 Commercial real estate races to keep up with population growth

As the population of New Braunfels continues to grow at a rapid rate, so does investment and construction in commercial real estate.

At the same time, a very low vacancy rate in certain areas of commercial real estate, such as offices and retail, is putting pressure on developers to build more around New Braunfels in order to offer more options to businesses.

“We’ve seen almost 100% absorption of our office market,” said Jonathan Packer, president of the Greater New Braunfels Chamber of Commerce. “We have opportunities emerging where there will be some evolution of all of our new and existing retail areas in the city to bring jobs and people together and attract the right kind of employment. We need spaces that allow us to compete for these opportunities.

Data produced for GNBCC by CoStar Group, an organization that studies and analyzes the commercial real estate industry, shows that nearly 200,000 square feet of new commercial construction is under construction in 2022.

Of the nearly 9.5 million square feet of total retail space currently on the market, 2.1% is available. Office space inventory has also increased by more than 11% over the past three years while remaining virtually fully occupied, the data shows.

Even commercial properties that have lagged and sat vacant for years are now filling up, said Mike Ybarra, manager of Legacy Commercial Real Estate in New Braunfels.

“When you start getting into the infill sites, the sites that are incredibly challenged, … you see them contracted out at very reasonable prices,” Ybarra said. “We’re basically out of office space and we’re basically out of retail space at this point. So there is a need for developers to provide more of this type of product. We have so many requests from tenants for space for both medical practices and retail. And yet, we just don’t have the product to seriously argue with most of the time. »

While there isn’t a single factor or set of data to determine why a commercial real estate market might be so competitive locally, there are a few things to consider in understanding why this is happening, Packer said.

One area to look at is not just New Braunfels’ population growth, but which age brackets are growing the most.

“In five years, the percentage of the population with a bachelor’s degree or higher has increased by 11.5%. In the under-18s, we are progressing through one primary school per year,” Packer said. “People in their prime working years with degrees, skills, professions that require education move here with children, and so when we really dig into the data, it directly affects our definition of what adds value. economically valuable.”

Packer said in the past it was common to see commuting patterns in New Braunfels that looked more like a dormitory community, but that’s changing. He noted that while New Braunfels has always had a focus on tourism as a destination for vacationers, low-wage jobs have created a net influx of people to fill the service sector jobs that support those tourists. However, with salaries over $40,000, New Braunfels has seen a net exodus of people residing in town but not working in New Braunfels, Packer said.

“We believe there is an opportunity to bring jobs and people closer together,” Packer said. “It’s a hallway that we pay a lot of attention to. There’s a lot of opportunity, and if we can match that opportunity with the skills of the residents and knowing what a phenomenal place New Braunfels is to live, for us, it’s kind of that alignment of community d First, the economic opportunity, then the reality of development is somehow our strategy focuses.

This growth, at least in the eyes of some commercial real estate agents, has remained virtually uninterrupted during the COVID-19 pandemic.

“It’s almost like New Braunfels, it’s definitely a different market from Austin by far and even a San Antonio where COVID[-19] the closing effect was so minimal here compared to other markets, where almost every spot that when reopened exceeded its 2019 sales,” said Patrick Wiggins of Wiggins Commercial of properties overseen by the society. “So they’re doing better than they were before the pandemic, and it was like an anomaly on the radar.”

Variable demand depending on the sector

The location and emergence of New Braunfels as a unique submarket in the San Antonio area is also contributing to the rise in new office space, said Daniel Khalil, principal market analyst at CoStar.

“It’s quite unique among many other areas [where] we don’t see a huge increase in offices everywhere. What’s happening with the desktop, it’s not something we see in every submarket,” Khalil said. “We have seen a real acceleration in the construction of many new offices. Comal County is in some ways perpetually one of those growing submarkets.

With the continued construction of new office space in New Braunfels and Comal County, the vacancy rate remained at 3.2% while the San Antonio area in general has a 10% higher vacancy rate. % or more, Khalil said.

“It’s actually unique because the San Antonio metro as a whole had negative absorption, which means less space occupied,” he said.

For multi-family units, new construction forecasts indicate that an additional 972 units will become available over the next two years.

That could mean greater availability for tenants where the market is currently very tight, Khalil said. “Over time, we’re really seeing that rate stabilize and maybe even be a bit lower than San Antonio’s rate as a whole, but certainly not as low a vacancy rate as we’re seeing right now.”

According to David Ballard, senior vice president of CBRE, a commercial real estate company, some of the efforts in recent years to keep the skilled workforce in town have been in the medical field. the construction and rental of buildings in recent years.

Restaurant space is another area where supply is struggling to keep up with demand, said Jeremy Rushing, partner at Restaurant Realty Group, a commercial broker specializing in restaurant real estate in the San Antonio and San Antonio areas. ‘Austin.

“There’s hardly any availability right now. If you want to completely build a space, there are a few options, but a lot of people are looking for what’s called second-gen,” Rushing said.

For would-be restaurateurs willing to spend the money to build a kitchen, it will be an investment, he said, ranging from $100,000 to $1 million, making second-generation spaces a hot commodity, a Rushing said.

“Those [second generation] Spaces are much harder to find these days. Especially the smaller ones with a patio or drive-thru, these are picked up almost instantly.

Still, some issues for the foreseeable future could dampen growth on the business front, said William Chittenden, associate dean and professor of finance at Texas State University.

“I wonder though, given the recent acceleration in interest rates, if this will impact any of these things that have been proposed but have not yet been launched – if they are going to be postponed “, did he declare. “In the three reports [from CoStar]they have big spikes in 2023 in terms of what’s supposed to go live.

Chittenden said recent interest rate hikes by the Federal Reserve will have an immediate effect on the purchasing power of homebuyers, which could also affect the projected growth in commercial real estate.

The tension between rapid population growth and increases in interest rates could increase some of the business project projections, though the outlook is uncertain, Chittenden said.

Khalil said the change in interest rates is too recent for a quantifiable forecast, and any construction currently underway would not be affected. “If anything, it would reduce vacancy rates even more because, you know, there would be less new online offerings for a growing submarket,” Khalil said.

For his part, Ybarra said he saw no signs of the market slowing down.

“The level of activity has been extraordinary. We have many, many newcomers to this field. Moving here and wanting to work in various positions. What we have also seen in the market is that most of the deals that close are cash deals with a very reasonable closing time,” Ybarra said.

Recently, his company has received consistent inquiries about commercial properties from area codes all over the United States, whereas two years ago, he said, most inquiries were more regional.

Ybarra said he believes if a slowdown occurs, it won’t be noticeable in the area at first.

“Parts of the country are going to be much more affected than what we see happening here in this corridor of Texas. Part of the driving force behind that is you have San Antonio and Austin and Houston and Dallas, which are huge job creators today,” Ybarra said. “So as long as those jobs are available, you’ll see migration ports filling those positions.”