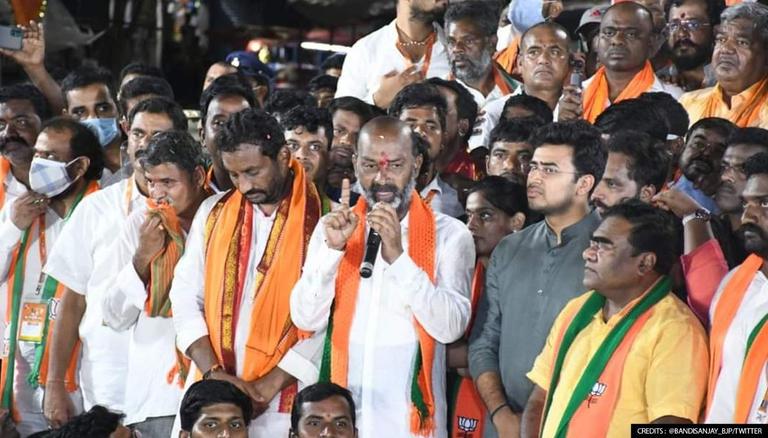 Addressing a public meeting on the 11th day of Praja Sangram Yatra, Telangana Bharatiya Janta (BJP) party leader Bandi Sanjay Kumar said on Tuesday that the party would bring a population control law to the state s came to power after the 2023 Assembly elections. In his address, the BJP leader also refuted allegations of spreading hatred and provocation during his yatra. BJP leader and youth wing chairman Tejasvi Surya has made several allegations about the KCR government in Telangana.

“If telling and explaining facts provokes people, then the party would definitely continue this work because we have released ‘Praja Sangram Yatra’ to find out the problems of people including students, farmers and unemployed young people who are facing hardships. problems in the TRS regime,” added Bandi Sanjay Kumar.

Youth leader Tejasvi Surya described Bandi Sanjay as a leader who “stands with the people in difficult times rather than a grabber who rules from a farm”.

BJP leader again claimed that CM KCR promised to celebrate September 17 as ‘official day of liberation’ but he is not implementing it due to fear of All India Majlis-e-Ittehadul Muslimeen (AIMIM).

In a major allegation, Kumar also said that the TRS government never submitted a list of beneficiaries of double bedroom houses to the Modi government.

“Modi government sanctioned 2.73 lakh houses for the homeless poor in the state under Pradhan Mantri Awas Yojana. But KCR dreamed up the poor in the name of twin room and failed to The party has asked the TRS government to submit a list of beneficiaries of double bedroom houses which has never been submitted,” the BJP leader said.

The BJP leader has promised to provide the same if he comes to power.

According to Kumar, BJP in Telangana will bring population control bill to Uttar Pradesh lines. According to the bill introduced by the government led by Adityanath, a civil servant and an ordinary person who adopts the two-child standard by undergoing a voluntary sterilization operation on himself or his house will be entitled to benefits such as a low-interest loan for the construction or purchase of a house. at nominal interest rates, discount on utility charges, maternity or paternity leave for 12 months with full salary and allowances, etc. Meanwhile, the Center has made it clear that it does not envisage such a policy across India.