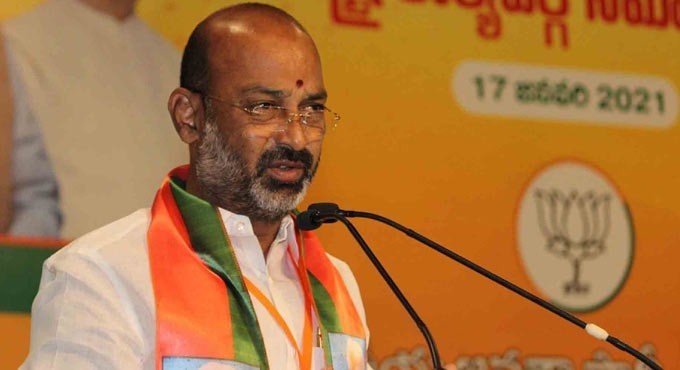 Sangareddy: Chairman and Telangana State BJP MP Bandi Sanjay Kumar said on Tuesday that the party would bring a population control law to the state if it comes to power after the 2023 elections in the state. Assembly.

Addressing a public meeting in Sangareddy on the 11th day of Praja Sangram Yatra, Kumar said that the BJP will implement a population control law on Uttar Pradesh lines after coming to power in Telangana.

Refuting allegations of spreading hatred and provoking people during his yatra, the BJP Head of State said, “If telling and explaining facts provokes people, then the party would definitely continue this work because we have come out ‘Praja Sangram Yatra’ to know about the problems of people including students, farmers and unemployed youths who are facing problems in the TRS scheme. The BJP leader asked the TRS government to celebrate September 17 as an “official day of liberation” as promised by CM KCR before coming to power. “But KCR forgot their promise under pressure from AIMIM,” he alleged.
He said Union Home Minister Amit Shah will attend a public meeting on September 17 in Nirmal on the occasion of Liberation Day.

“The Modi government has sanctioned 2.73 lakh houses for homeless poor in the state under Pradhan Mantri Awas Yojana. But KCR dreamed up the poor in the name of the twin room and failed to provide them. The party asked the TRS government to submit a list of beneficiaries of two-bedroom houses which was never submitted,” the BJP leader said.

Assuring to provide houses to the poor in the state, Sanjay said the BJP will do its best to provide more houses if it comes to power.

Addressing the meeting, BJP National Chairman Yuva Morcha Tejasvi Surya called on the people to continue their support until the BJP forms the state government.

Calling Bandi Sanjay’s padyatra a fight against the TRS government, he said the yatra breathed new energy and a wave into Telangana people who had had enough of the “corrupt” TRS government. “With the success and support of people at this yatra, TRS leaders and workers are scared,” he said.

“This yatra is a fight between justice and injustice,” Surya said, while calling Chief Minister K Chandrashekar Rao’s regime a “government of lies”.
“The car belongs to TRS, but its driver is a razakar (MIM),” he said adding that the BJP would ensure the end of this government.

He said KCR used to say his government would value “water, funds and appointments, but now it has turned into ‘tears, debt and unemployment’.