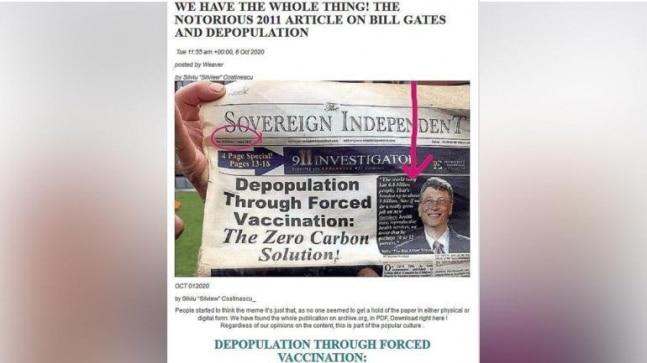 Amid reports of several deaths in Norway after the Covid-19 vaccine was administered, a viral Facebook post claims that Microsoft co-founder Bill Gates wants to reduce the world’s population through forced vaccination. The Facebook post shows an old newspaper article to back up the claim.

Many Facebook users posted a picture from a 2011 edition of the Irish newspaper “The Independent Sovereignwhose title on the first page reads: “Depopulation by forced vaccination: the zero carbon solution”.

The front page also contains a photo of Bill Gates with a quote supposedly given by him. The social media caption with the image reads, “WE HAVE IT ALL! THE FAMOUS 2011 ARTICLE ON THE BILL GATES AND DEPOPULATION”.

India Today Anti Fake News War Room (AFWA) discovered that this 2011 article from “The Sovereign Independent” falsely suggests that Gates wants to depopulate the world through vaccination. Gates had said that vaccinations can reduce infant mortality, which in turn leads to reduced birth rates and population growth.

Archived versions of the post are saved here, here and here.

The newspaper and its conspiratorial articles

With the help of keyword research, we found that the viral cover image is from the fourth edition of “The Sovereign Independent” which was published in 2011. The archived link of this edition is saved here.

“The Independent Sovereign” is an Irish newspaper available only in print. According to a note from its editor Dave Derby, the first edition was published in 2009. Although the journal is not currently available online, archived versions of its older editions are easily accessible.

We found that the newspaper had published several such articles on conspiracy theories in 2011, ranging from calling Osama bin Laden a “constructed hoax” to autism caused by vaccination.

What Gates said about population and vaccination

Calling the Microsoft founder “Billy ‘The Kid Killer’ Gates,” the article used an old quote from him about population in the wrong context.

The quote reads: “The world today has 6.8 billion people. That’s heading towards about nine billion. Now, if we do a really good job on new vaccines, health care, reproductive health services, we could reduce that by maybe 10 or 15%. »

The article states that it is the agenda of Bill Gates and the United Nations to depopulate the world through vaccines.

In a 2010 TED Talk titled “Innovating to Zero”, Gates can be heard saying this phrase at 4 minutes and 21 seconds into the video. Gates was discussing ways the world could reduce carbon emissions and suggested that one of them was to reduce population growth by improving health care.

the Bill & Melinda Gates Foundation pledged billions of dollars in vaccination programs around the world.

We found that Gates repeatedly said that by improving health care, population growth could actually be slowed. In one maintenance in 2012 and also in a Youtube video in 2018, he repeated the same point.

In a 2011 Forbes magazine article, Gates found from statistics that in countries where infant mortality rates have fallen, birth rates are also falling. He therefore believes that by improving health care and through vaccination, the world’s population can be stabilized.

We have found that similar quotes from Gates regarding population control and vaccinations have been used repeatedly in the wrong context, many of which have been demystified by fact checkers.

Therefore, the claim that Bill Gates plans to depopulate the world through forced vaccination is false.

READ | Fact check: No, this is not a rehearsal of protesting farmers for the January 26 tractor rally 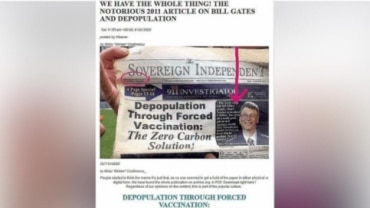 To claimThis old newspaper article sheds light on Microsoft co-founder Bill Gates’ plan to depopulate the world through forced vaccination. ConclusionThis 2011 article from the Irish newspaper “The Sovereign Independent” incorrectly suggests that Gates wants to depopulate the world through vaccination. Gates had said that vaccinations can reduce infant mortality, which in turn leads to reduced birth rates and population growth.

The number of crows determines the intensity of the lie.