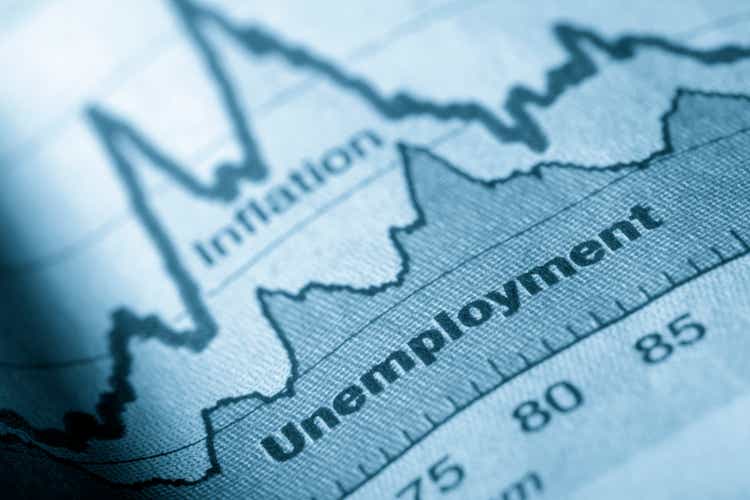 This morning’s employment report for August showed a 315K increase of the total non-farm payroll, which was higher than the invest.com forecast of 300,000 jobs added. The unemployment rate rose to 3.7%.

Here is an excerpt from the Employment Status Summary released this morning by the Bureau of Labor Statistics:

Here’s a look at the monthly percentage change in nonfarm employment since 2000. We’ve added a 12-month moving average to highlight the long-term trend.

The chart here shows the trend of unemployment, recessions and the S&P Composite since 1948. Unemployment is usually a lagging indicator that moves inversely to stock prices (top series of chart).

Note the rising spikes in unemployment in 1971, 1975, and 1982. The mirror relationship seems to repeat with previous bear markets. The COVID-19 pandemic briefly showed the same kind of relationship between equities and unemployment, although the impact was temporary and irrational exuberance took over.

The following graph shows the unemployment rate for the civilian population unemployed for 27 weeks or more. This rate has fallen considerably since its all-time high of 4.4% in April 2010. It now stands at 0.7%, unchanged from the previous month. 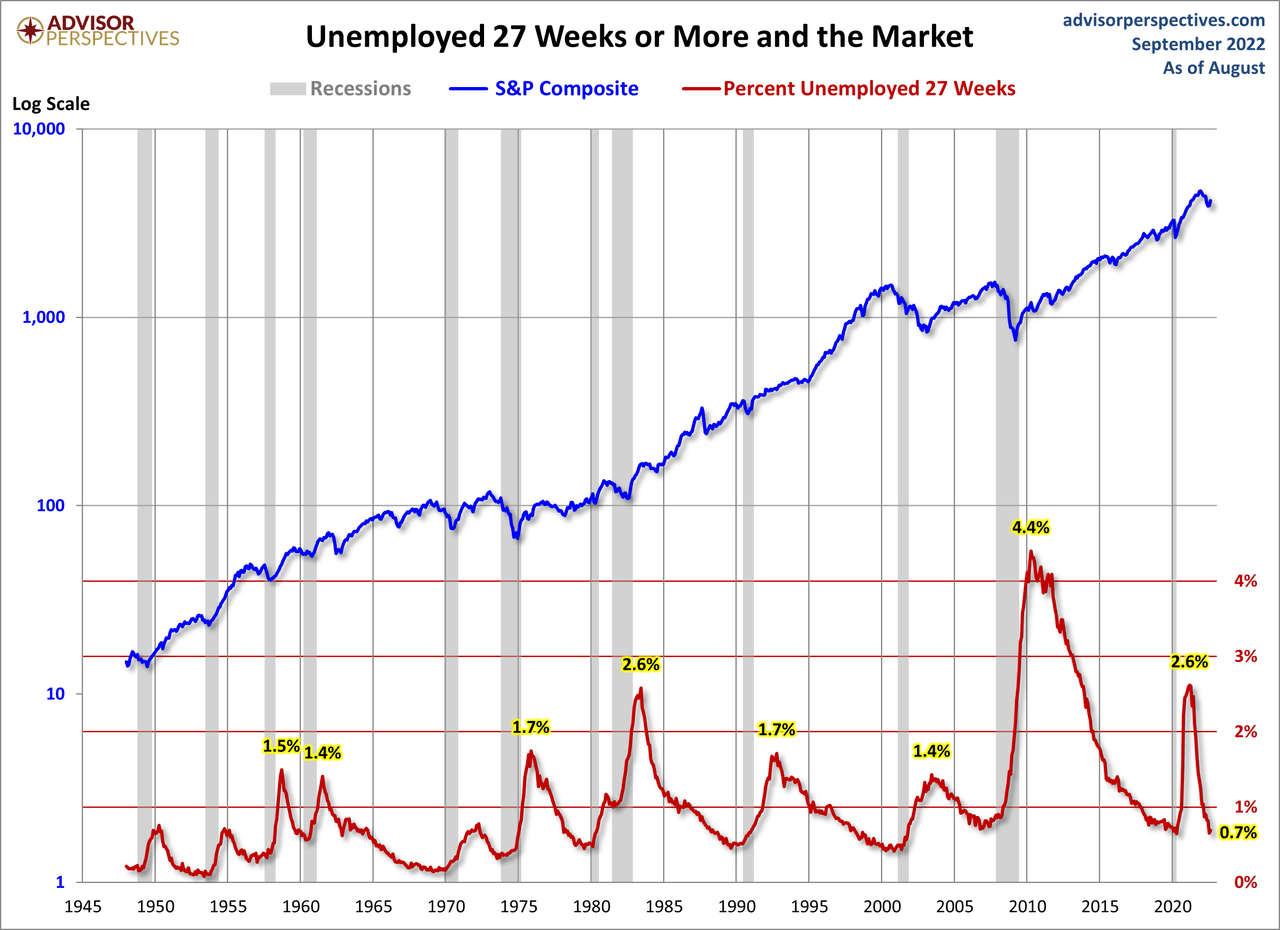 The following graph is an overlay of the unemployment rate and the employment-to-population ratio. This is the ratio between the number of employed persons and the total civilian population aged 16 and over. 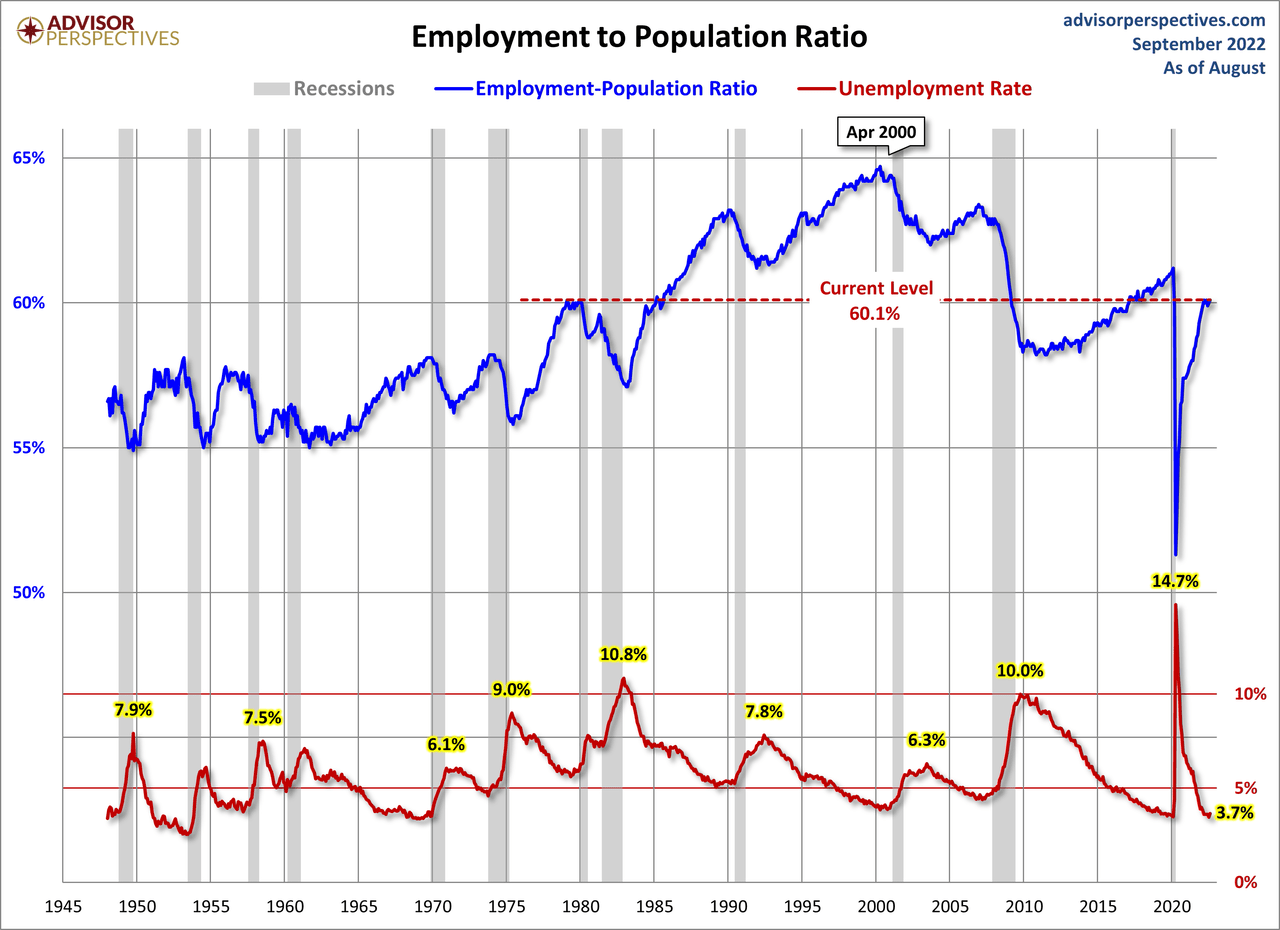 The inverse correlation between the two series is evident. We can also see the accelerating growth of women in the labor force and dual-income households in the early 1980s. Prior to the COVID-19 pandemic, employment-to-population ranged between 58.2% and 60 .6% – the lower end of which recalls the 58.1% ratio of March 1953, when Eisenhower was president of a single-income country. households, the Korean War was still going on and rumors were circulating that soft drinks would soon be sold in cans.

Due to the global pandemic, we are seeing employment-to-population ratios at their lowest levels on record. About half of the population aged 16 and over is currently employed.

The latest ratio of 60% is above its lowest level in the history of the series.

To confirm the secular change that the United States is experiencing on the employment front, the following chart illustrates the labor force participation rate. We are at 62.4%, up from last month. 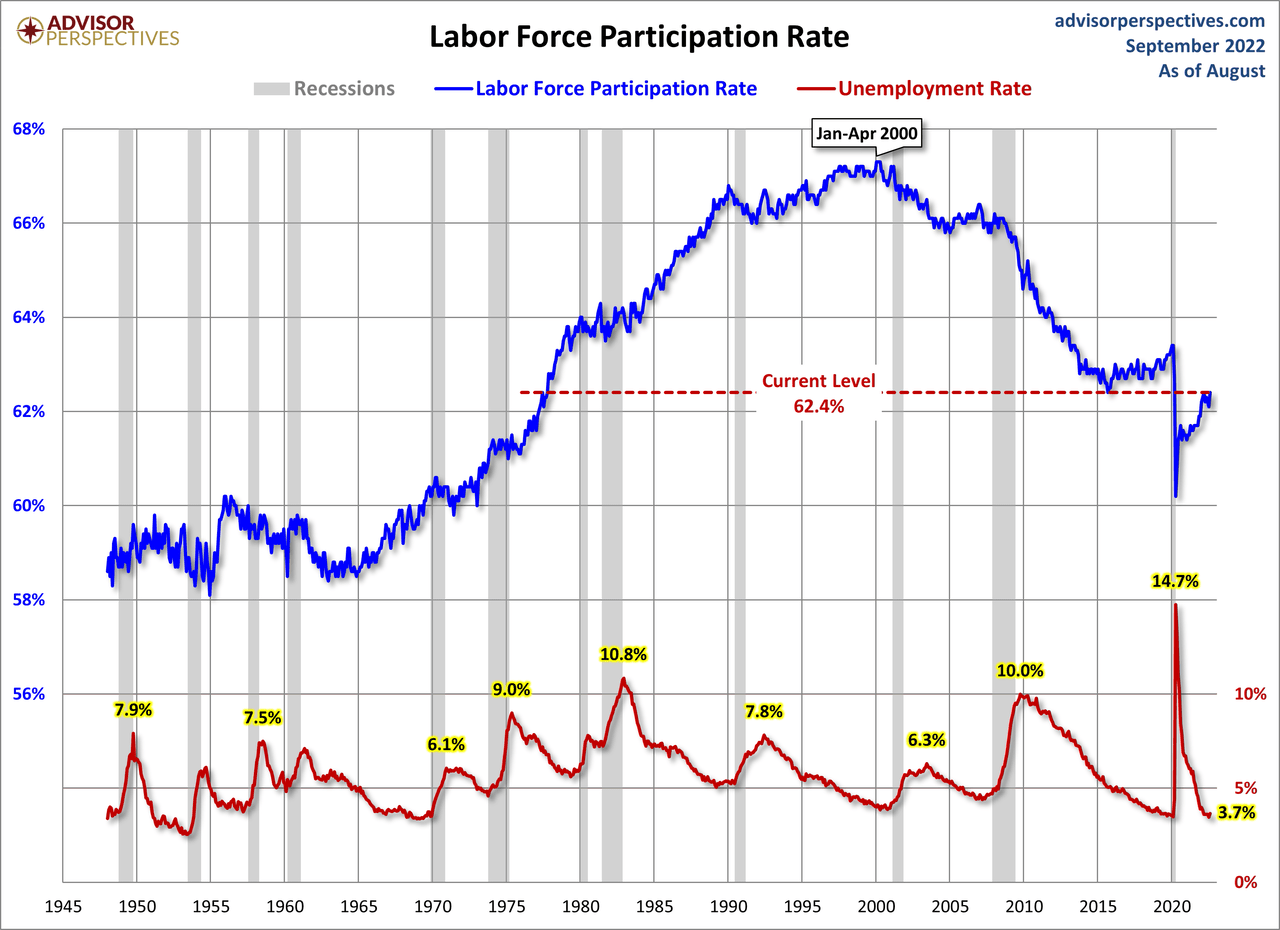 The employment-to-population ratio and the participation rate will be interesting to watch in the future. The first wave of baby boomers will continue to be a downward force on this ratio.

The oldest among them were eligible for early retirement when the Great Recession began, and the transition of the baby boomer cohort to full retirement age will not end until 2030. 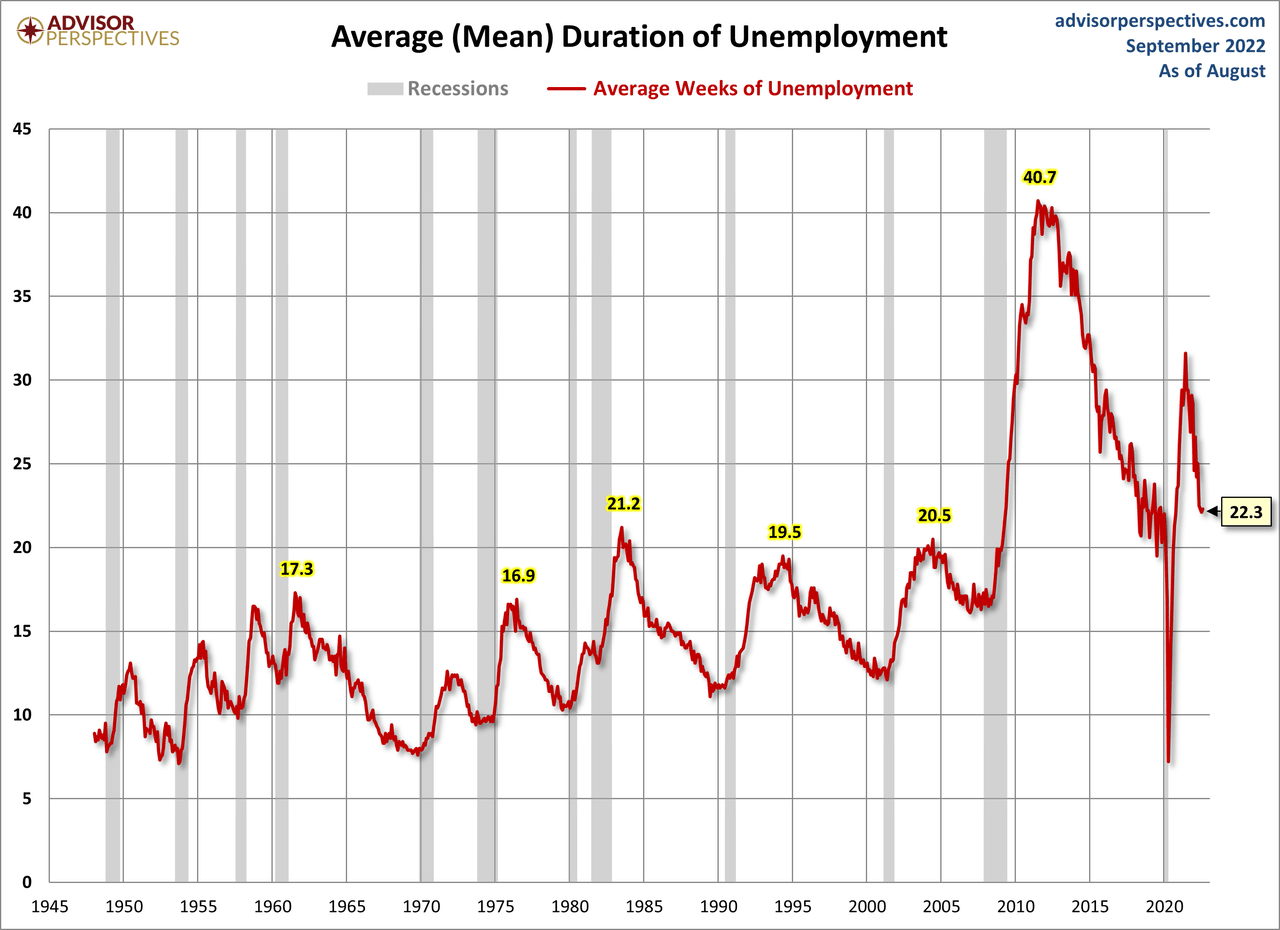 The Bureau of Labor Statistics’ broadest measure of unemployment is series U6, which includes the total number of unemployed, plus all marginally attached workers, plus the total of part-timers employed for economic reasons. This series dates from 1994. 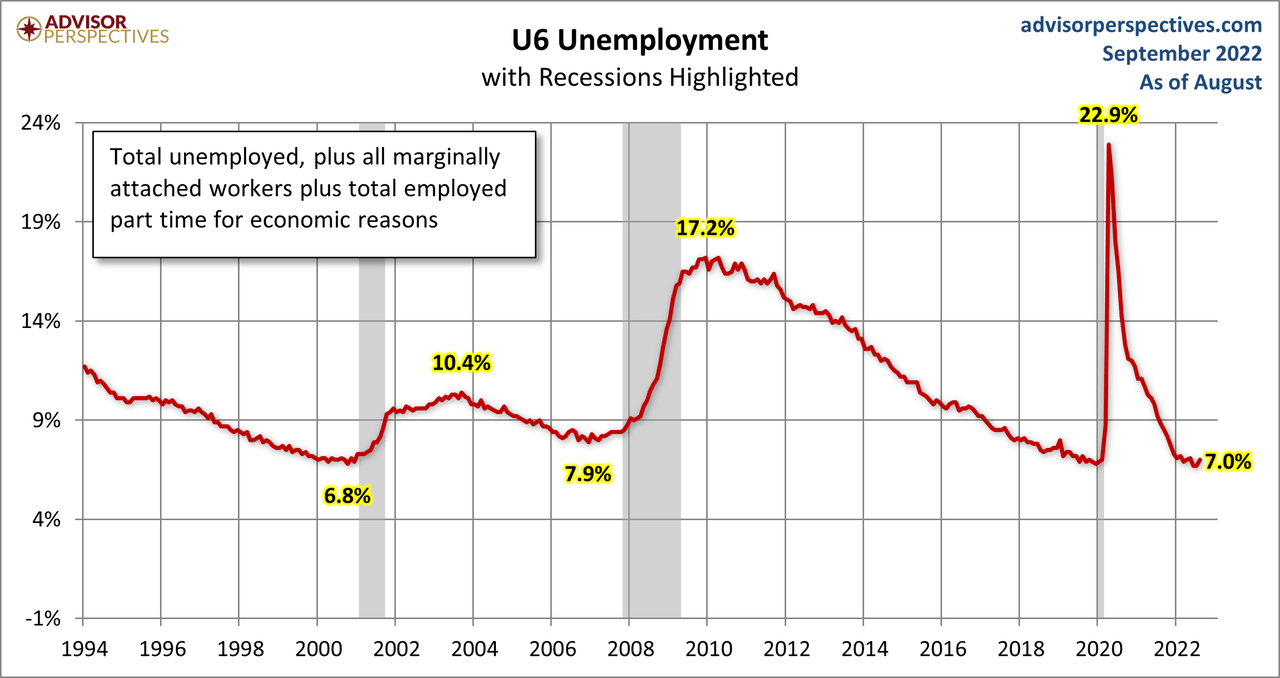 Remarks: The start date of 1948 in the graphs above was determined by the first monthly employment data collected by the Bureau of Labor Statistics. The best source for historical data is the Federal Reserve Bank of St. Louis.

Editor’s note: The summary bullet points for this article were chosen by the Seeking Alpha editors.

2022-09-03
Previous Post: Attract travelers with effective advertising
Next Post: Artificial light could become a new weapon in the fight against malaria