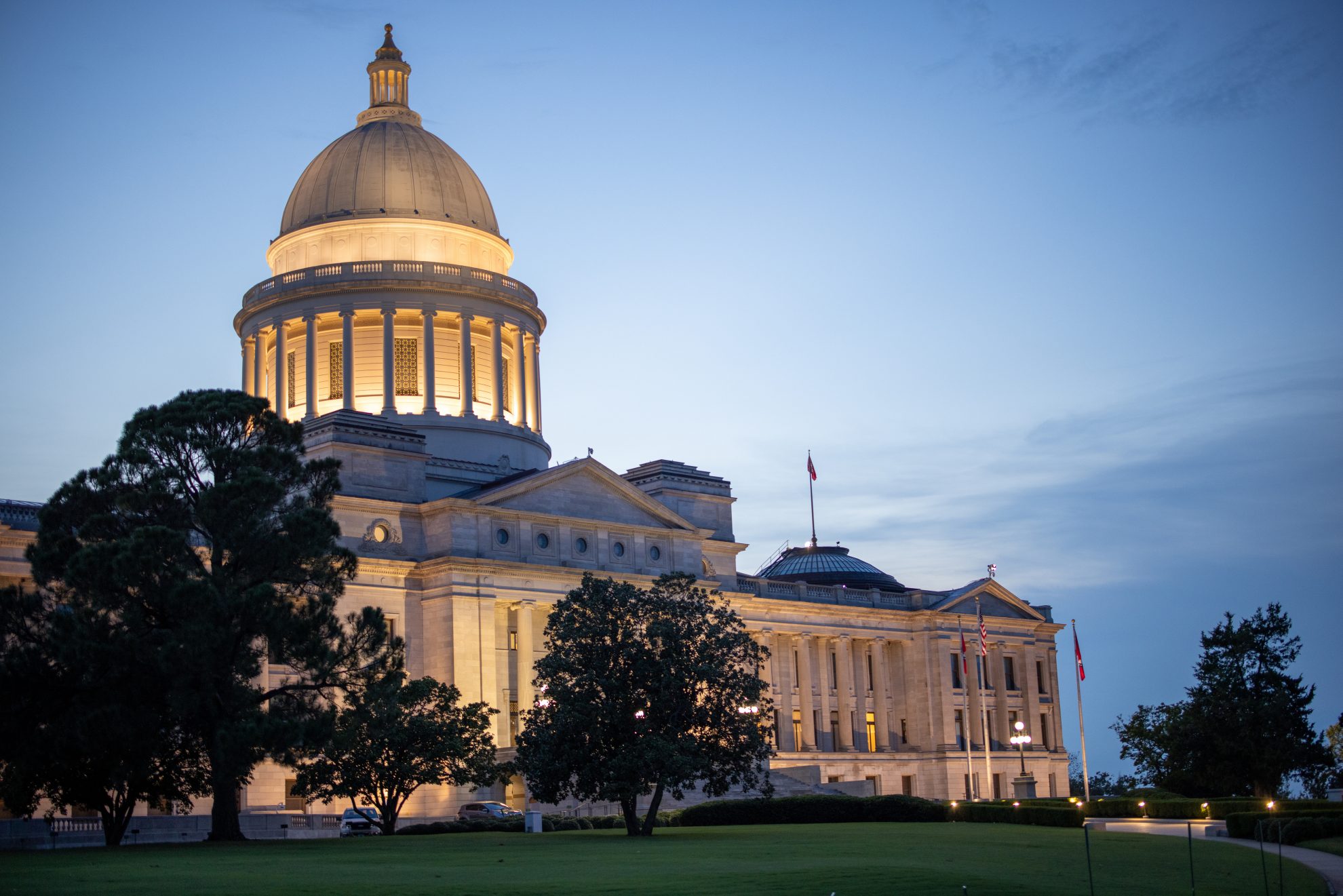 With the passage of SB1 at the third special session of the General Assembly, Arkansas last week became the 13th state to allow a reduction in the personal income tax rate this year. This round of income tax cuts in Arkansas effectively accelerated reforms that policymakers passed eight months ago.

The December 2021 changes put the state on track to lower its top personal and corporate income tax rates from 5.9% and 6.2%, respectively, to 4.9% and 5.3% as of 2025. However, the state’s $1.6 billion surplus in fiscal year 2022 enabled the three-year deadline for personal income tax to be advanced and two years for corporation tax.

The passing of SB1 marks the fifth round of reforms led by Governor Asa Hutchinson (R) since 2015 that have focused primarily on rate cuts. Tucked away in the last two reform bills, however, have been seemingly minor policy changes that, while making less headlines, actually make Arkansas’ tax structure much more neutral and competitive. It is these somewhat less intuitive reforms that Arkansas policymakers should prioritize going forward. Rates are important, but more so how those rates interact with the rest of the code.

During the December 2021 Special Session, the Legislature designed tax reforms to include immediate personal income tax reductions supported by well-designed corporate income tax reform, tax triggers revenue and indexation to inflation. The state was in the enviable position of having a fiscal 2021 surplus of $946 million, a projected budget surplus of $263 million for fiscal 2022, a reserve of $1.2 billion and full funding of essential obligations under the State Revenue Stabilization Act.

The incremental revenue-based approach has allowed Arkansas to chart a responsible path to regional competitiveness while protecting against unforeseen economic downturns or inflation-related costs. In line with the 2021 reform package, provided the state did not dip into its disaster reserve fund between July 1, 2022 and January 1, 2025, the highest individual rate would have decreased to 4.9 % at the beginning of 2025.

The Department of Finance and Administration (DFA) projected that if fully implemented by fiscal year 2026, the 2021 rate cuts would cost the state about $1.9 billion in revenue lost during the period, which would cost $523 million per year by FY2026. The state had projected a surplus of $263 million in FY2022, but the DFA noted that the income tax reforms would likely reduce general revenue by $135.2 million in the same fiscal year, halving the projected surplus.

Contrary to projections, Arkansas ended fiscal 2022 with a surplus of $1.6 billion, about six times more than expected. In a similar vein, the revenue costs noted for 2023 have been virtually imperceptible in revenue reports released since the cuts were enacted. After accounting for surpluses from fiscal years 2021 and 2022, the full amount of estimated lost revenue can be paid out immediately, with $300 million remaining. Surpluses alone should go a long way to allaying concerns about the long-term stability of rate cuts. But equally important is the fact that the Ministry of Revenue’s estimates were not dynamic and therefore did not take into account the effects that tax savings would have on the economy.

It is well established that cuts in marginal rates lower economic barriers to productivity. When workers and business owners consider the impact of taxation on their next dollar of income, they consider the extensive and intensive effects of taxation (i.e. whether to work/invest and how much work/invest). Thus, lowering the personal income tax rate from 5.9% to 4.9% should encourage marginal in-migration and increase employment.

Accelerated rate cuts are also likely to influence the amount of work people choose to do. When workers can take more of their next dollar home, it will incentivize, at the margin, those who are already employed to work an extra term (hour, week, full-time or part-time).

All this does not mean that the tax cuts alone would have been amortized. They wouldn’t. But it would be incomplete to suggest that lower rates, inflation-adjusted brackets, and $1.9 billion in additional discretionary spending among individuals, small businesses, and corporations won’t flow back into the general fund. significantly in the form of new revenue. additional purchases, higher wages and salaries, and higher levels of employment on the extensive and intensive margins.

Since tax reforms in Arkansas began in earnest in 2015, most of the attention and energy has focused on increasing the competitiveness of personal and corporate income tax rates in the state, and with good reason. As previously written, Arkansas rates were quickly becoming regionally uncompetitive. In 2021, even after three previous rounds of rate cuts, each of the states bordering Arkansas except Louisiana had a personal income tax rate at least 0.5 percentage points higher. percentage lower and at most 5.9 percentage points lower than the Natural State.

With the state’s best individual and corporate rates now pegged at 4.9% and 5.3%, respectively, Arkansas’ rates are the regional median. And while a state’s rates are important, just as important is how those rates interact with less important elements of a state’s tax code. A significant tax pyramid may occur in the sales tax base, or businesses may not be able to deduct operating losses and capital investments due to lack of losses net operating expenses and well-designed expense allowances, for example. A state may have very low or no personal income taxes, but may not be able to generate sufficient economic activity due to other tax policies that are inconsistent with a healthy business climate.

Recently, Arkansas policymakers have taken significant steps toward a more neutral and stable tax code that doesn’t rely solely on rate cuts. The state had previously indexed its individual tax brackets to inflation, and in the December 2021 special session it indexed the standard deduction and consolidated its two lower tax tables into one. Although the title of the most recent special session was the acceleration of the rate cut, an equally important but less publicized element will conform the state’s treatment of capital investments to the provisions of the tax code which allow the immediate expenditure of capital investments in the year the investments were made. made.

Consider how our State Enterprise Tax Climate Index noted the impact of SB1 on the state’s fiscal competitiveness. Prior to the last special session, Arkansas’ tax structure ranked 43rd out of 50 in overall structural competitiveness. Its corporate income tax (CIT) and personal income tax (PIT) ranked 30th and 37th respectively. If the acceleration in rates were taken into account alone, the State would move up one place, to 42nd place, its CIT would improve slightly to 29th place, and its PIT would remain unchanged.

When Arkansas’ compliance of capital investment treatment with IRC Sections 168 and 179 is included, the state’s ranking increases significantly. This less dramatic, below-the-fold structural change, combined with the rate cuts, propels the state to 38th overall, 22nd for CIT and 34th for PIT, reflecting that businesses can immediately spend capital investments during this year. it was made has an outsized impact on economic growth.

As Little Rock policymakers discuss how to leverage future tax reforms to facilitate greater economic activity, they should look beyond rates and focus on a broader range of policy changes – on elements which can be hidden in the inner folds of the code. These policies may be less known to the public, but companies are intimately aware of them. They are an integral part of any competitive tax system and are often much cheaper to implement than large-scale base rate reductions.

At the top of the list of reforms to be discussed in the future could be overhauling the state’s treatment of net operating losses – a change that would remove barriers to entrepreneurship, reduce income volatility and remove conditions that disadvantage low-margin industries. A second reform could include eliminating the state back rule, a policy that risks double taxation and encourages out-of-state relocation. Third, policymakers could repeal the franchise tax (also known as the capital stock tax), which acts as a tax on corporate wealth and discourages investment. Many of these reform options and other ways to stabilize income can be found in the Tax Foundation’s guide to Arkansas tax reform.

In the meantime, Arkansans have reason to be encouraged by the recent accelerated tax reforms coming out of Little Rock. Annual incremental tax changes have played a significant role in the economic and demographic gains that many states have made over the past decade, including Arizona, Indiana, North Carolina and Utah, to name a few. to name a few. There are many reasons for residency and relocation, but of the variables that state governments can affect, tax policies are among the most influential.