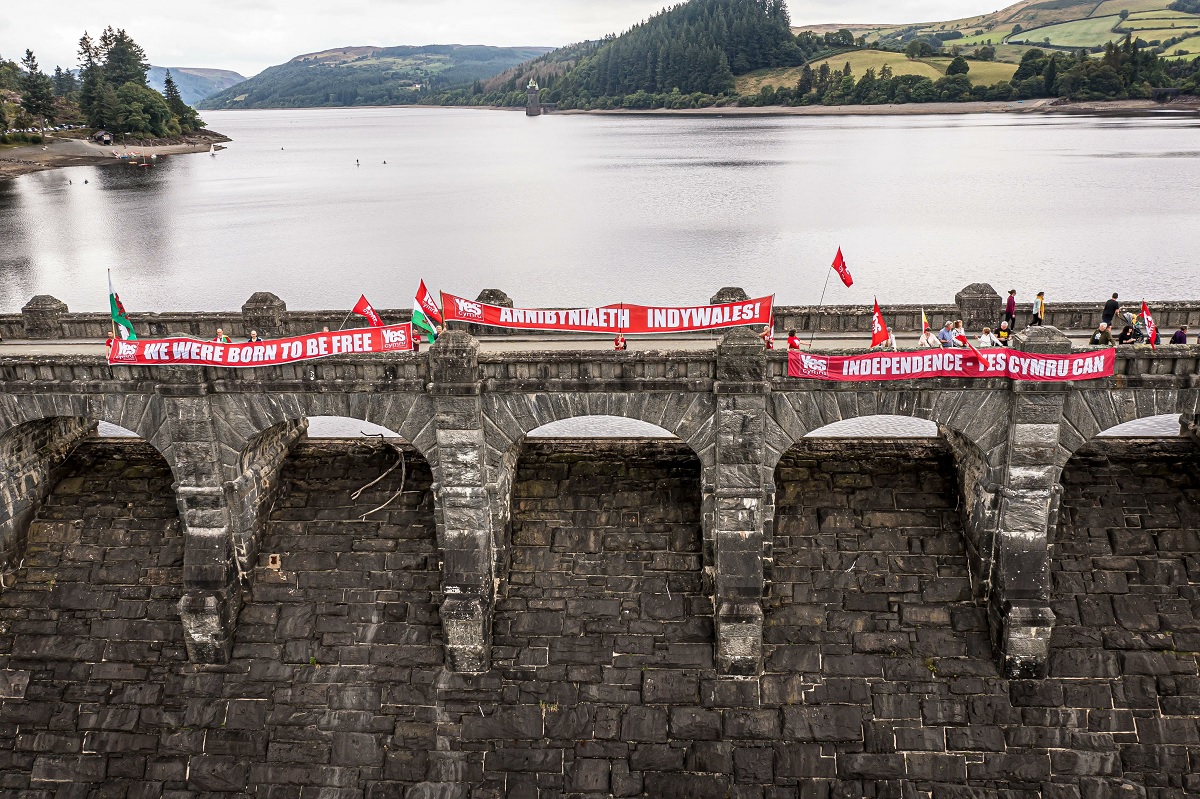 7,000 people demand Senedd be given full control of Welsh water as protests take place in drowned valleys to create reservoirs

7,000 signed a petition demanding that the Senedd have full control of natural resources in Wales after YesCymru staged protests against Drowned Valleys to create reservoirs around Wales.

The Independence campaign group staged a protest in Capel Celyn, flooded in 1965 to create a reservoir, Llyn Celyn, to supply water to Liverpool and the Wirral.

Meanwhile, they also staged a protest at Lake Vyrnwy in Powys which was created in the 1880s, overwhelming the village of Llanwddyn.

The waters of Llyn Celyn, the creation of which gave rise to the slogan ‘Cofiwch Dryweryn’, are currently so low due to drought that the main road, chapel and graveyard are visible.

The “Cemetery of Capel Celyn” emerges from #Tryweryn #CapelCelyn . I drove home from Harlech to see that the water had gone down again and the cemetery signs were now in full view. #CofiwchDryweryn pic.twitter.com/tn8PJbCMwm

Currently, the Welsh Parliament and Government have no control over cross-border water regulation on the Welsh-England border.

Campaigners argue that if Wales had this power it could demand compensation for the use of Welsh water to provide drinking water in England, raising hundreds of millions.

Urging people to sign the petition, petitioner Nerys Jenkins said: ‘Work has already begun to transfer water from Wales to drought-stricken areas of England, according to the chairman. of the National Infrastructure Commission.

“Water is a precious commodity and this is another example of London diverting our most precious resource without any consultation or benefit to our communities.

The petition also notes that Wales should control its own energy supply and seabed, which is currently mostly owned by the Crown Estate.

The petition was launched after the chairman of the National Infrastructure Commission said “work has already begun” to transfer water from Wales to drought-stricken areas of England.

Sir John Armitt, speaking on The briefing room on Radio 4 said water companies in England did not want to invest in reservoirs and were unpopular with communities who did not want their lands flooded.

Instead, he said, Severn Trent and Thames Water were in talks to transfer water from Wales to southern England, starting at Lake Vyrnwy and being transferred through pipes or a channel to the Thames basin.

John Armitt said the companies were looking to get “more water on the supply side by building more reservoir capacity, or additionally, providing a water transfer system so that you carry water from where you have a surplus in the country to areas where you are likely to have a shortage”.

Reservoirs were, he said, “the most capital-intensive thing you can invest in. So we have the natural reluctance, I guess, of private companies to shell out the capital to build new reservoirs, and no big pressure on them, be frank on the part of the regulator to build new reservoir capacity.

“And of course everyone knows that as soon as you come up with a big new reservoir, you’re going to run into local resistance from local people who won’t want to see two or three square miles or potentially four square miles of agricultural land land devoted to a new reservoir.

David Aaronovitch chimed in to say, “Or as in the case of Wales at the time, whole villages.”

Sir John Armitt added: “Well, indeed, and of course one of the largest in Wales is Lake Vyrnwy, which would be the potential source of a water transfer system.

“So Severn Trent controls Lake Verwey in mid Wales. And the Thames [Water] control the Thames basin, and the plan they have is to move the water.

“And that could be up to three to 500 million liters a day between those two catchment areas when you do it through a series of pipes or you can do it through the canal system.”